Here’s a message from John Mills regarding this years Presentation Evening:

Again we are at Walmley Social Club on Friday October 7th, starting promptly at 7.45pm.

As in previous years ticket numbers are limited by our hosts, the maximum number is 180 which has to include organisers and the DJs. Tickets will cost £6.50 each with a discount for 4 or more, price includes a jacket potato and fillings.

Tickets will be on sale in the clubhouse from 7.30pm on Tuesday September 13th and following club nights. They will be sold on a first come first served basis and payment at the time of purchase.

There will be no admittance on the night without a ticket.

This early information will hopefully help to avoid the disappointment of previous years when members/parents were asking for tickets the night before the sold out event.

We are continually looking for a larger venue with a capacity of 250 to 300 to enable more members and parents to attend what is usually a very enjoyable evening celebrating the achievements of our members young and not so young.

Here are our lucky July winners !

Congratulations to all our winners and thank you for your support.

Next draw in … November..

There are numbers still available, only £16.20 a number.

The last two Presentation Evenings have been both very popular and successful and the club’s Management Committee would like this year’s event to be even better.

We are in the planning stage at the moment and knowing that nearer the event a number of the organisers are unavailable, we are looking for someone to work alongside the organisers and committee members.

You could be the one that brings that little bit extra to our Presentation Evening !

See Katie Jennings or John Mills at the club or email johnmills12@yahoo.com

A note from John Mills following this years presentation evening:

“It was nice to see a packed Walmley Social Club for this year’s event, although ticket numbers were limited, for the second year running they went like hot cakes.

The atmosphere created from start to finish by the cheering and applause for all our winners made it one of the best nights we have had for some years.

This year we had to replace the trophies for the Clare Fancote Awards and we invited two former recipients of this award to make this year’s presentations. Our female presenter was Emily Hathaway who was a club member from 1991 to 2003, winning many medals and championships for 8oo metres and Cross Country. Frederic Tremblay received his award in 2014 for a number of successful appearances for his native France at World and European Track and Field Championships both Indoors and Outdoors. The prestigious Clare Fancote Awards are second only to the Club Person of the Year Award.

The club also awarded a Life Membership to Ruth Dobbins for her services as a timekeeper, not only to the club but to athletics in general.

The citation read as follows

Ruth joined the club in August 1998 along with some friends and work colleagues with the intention of running the London Marathon to raise money for the John Taylor Hospice and was coached by Gordon Chapman. I’m not sure whether the marathon was completed but I understand one or more half marathons were.

In the year 2000 Ruth took a Time Keeper’s course and I think from then on running took a bit of a back seat.

She has consistently supported the club both home and away and in particular the Young Athlete’s Track and Field League, often being asked at away meetings if she would take on the role of Chief Timekeeper. Having regular support such as this is very important because a lack of qualified officials can mean the loss of points from the team’s final score.

Ruth is now a Grade 2c and officiates more often than not as a ‘Chief’ at Club, County and Midland Counties Events. She can also be found at many major meetings working as a Backroom Official.

The club is very proud to award a Life Membership to Ruth Dobbins.

There was also this plea from the committee for volunteers –

I think many of the parents that are regular visitors to the clubhouse will have noticed the influx of new members, especially youngsters. This puts extra pressure on the daily and long term running of the club.

All Coaches, Club Officers and Committee Members are volunteers and we are always looking for more volunteers to help at the club. You may have skills that could be useful to the club or you may have a particular job in mind that you would like to volunteer for.

It could be serving at the coffee bar, raking a sandpit, collecting training fees, writing press releases, social media management, assisting a coach, these are just a few of many possibilities.

Your club depends on volunteers, as little as 2 hours a week or 2 hours a month would make a difference at the club – whatever spare time you think you may have, we could really use.

If you’re interested come and have a chat in the Clubhouse – ask any questions, tell us what skills you have and fill in a contact form and we will be in touch. Alternatively, you can contact us through the website, as normal.

After the presentations there was a break for jacket spuds then Bright Lights Disco turned up the volume until the very enjoyable evening ended at 11 o’clock.” 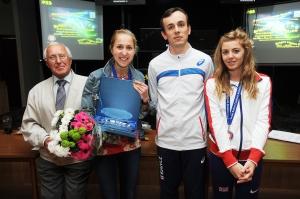 Well done to everyone who won medals at the Presentation evening.

A transcript of the various nominations and awards, as well as prize lists can be found here.

There are some excellent photos taken by Marc Kirsten on our FLICKR page – thanks Marc!!!

The U11 training squad and “Brian’s stars” will be heading to Cannock Chase on Sunday 22 December for a festive and fun training run across the Chase. Meeting at 8.50am at the clubhouse (for a 9am departure) the group will be heading over to Milford for a run (with lots of singing – Jingle bells, Rudolph the Red Nose Reindeer, etc), followed by lunch at the Barley Mow Restaurant and a return for approx. 2.45pm.  The cost is £8 and parents/helpers would be more than welcome.

Please speak to Martin Phipps or Brian Higson if you want to go or if you require further details.

As part of the Star City countdown to the 2012 Olympic  Games, acclaimed British sculptor and RSCAC member, Donald Brown, will design and create a large  relief sculpture entitled A Sporting Chance For Peace.
All club members, friends and associates are invited to  the launch at Star City in Birmingham on Wednesday 23rd November at 12 noon to  place a small ‘Peace’ of clay onto the sculpture as part of the creative  process.  The project will go on until the Olympics and covered  by the BBC & Channel 4.
Please confirm by email if you wish to attend: artistadmin@gmail.com
For more information visit: www.theglobalgallery.org

Teams of 4.  Cost of £5 per head (including supper).  Please support if you can to help raise funds for the club.

Tickets from the coffee bar in the clubhouse.