PBs galore at the Telford Games and Derby Athletics Festival 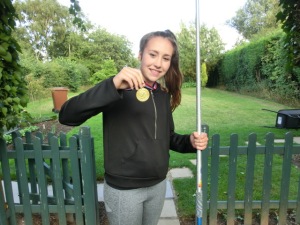 Graham Felton has sent in a report of some fantastic performances at the Telford Games and Derby Athletics Festival:

“Saturday’s Telford Games produced some excellent performances with a number of RSC athletes winning medals, here are the outstanding performances I saw:

Kane Howitt had a day to dream of winning double gold over 100 and 200 metres, both with Electronically timed PB’s. Jasmine Walker broke the club record with her first throw in the under-13 javelin competition  with a throw of 27.50 metres. She extended this to 27.92 metres with her 3rd throw, winning the competition and strengthening her position at the top of the West Midland rankings. She also is now placed in the top twenty of the UK rankings. 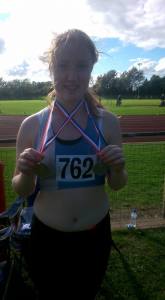 Ryan Humphries won gold in the High Jump taking his PB from 1.53 metres up to 1.60 metres. Hannah Smith won Silver in the U17 Discus with a new PB and Bronze in the Shot. Anna Short won Bronze in the U15 Shot with a new PB.
A small number of Sutton Athletes enjoyed great conditions and great success at the Derby Athletics Festival. Jasmine Walker threw 28.35 metres to win Gold which is the 3rd advance of the club record in 2 days. It extends her position as top of the WM rankings and puts her into 16th place in the UK rankings. Chrissie Prince won Gold in The U17 Shot and Discus and Bronze in the Hammer. Charlotte Prince (Chrissie’s little sister) won Bronze in the U11 600 metres in a new PB of 2.03 secs.” 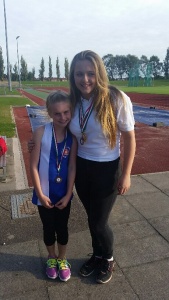 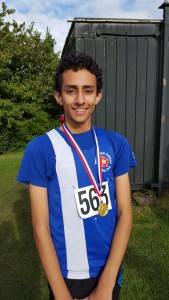