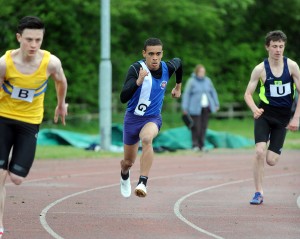 Some excellent results by RSC athletes at the Telford Games. Kane Howitt put in some superb performances to take 1st the U17 Long Jump in a new meeting record of 6.17m and just missed out on the club record. He also took 2nd place in the 200m Final in 22.9 and 5th in the 100m Final. His training partner Will Bonner also was in great shape in setting a new PB in finishing 2nd in the U17 400m and 6th place in the 200m Final.

As if not to be outdone by Kane, his jumps coach Megan Evans took 1st in the Triple Jump and 2nd in the Long Jump.

Ethan Brough was also in fine form in taking 4th places in both the U15 100m and 200m, in new PB times for both events, and was well supported by Tom Brough in the 800m and Jake Underwood in the Triple Jump, Long Jump and Javelin. Mollie Darrock and Rachel Iliffe both  had fine runs in the U15 Girls 200m heats before taking 6th place in the Long Jump and 5th place in the High Jump respectively.
Connor Race took a splendid 5th place in the U11 Boys 60m Final while team mate Evan Pritchard narrowly missed out on the final when finishing third in his heat. David Iliffe also ran a quick time. Both Connor and Evan narrowly missed out on making the 150m Final but were in fine form, along with David, in the Long Jump.
In the U13 Girls Olivia May Street (100m, 200m) ,Maddy Underwood (Shot) and Beth Darrock (100m and Long Jump) all competed superbly
Well done everyone! Report by John Topliss